Off-site construction is often presented as an innovative solution, the "Future" of the construction industry. However, it seems that its general adoption is relatively slow.

In a January 2021 report, at the request of former Housing Minister, Julien Denormandie, authors Bernard Michel and Robin Rivaton identified off-site construction as a "source of growth". The current economic and climatic circumstances reinforce the need to change the sector and require the immediate development of off-site construction. To promote this new mode of construction, three types of transformations must be taken into account: digital design and monitoring, centralised and automated production sites, production management method and assembly adapted to needs. So besides being a hot topic, where do we really stand on the rise of off-site construction?

What are we talking about here?

Off the building or off-site construction is characterised by an off-site, prefabrication stage. In other words, future buildings are "cast" or pre-built industrially just as cars are assembled in a factory. This prefabrication, when pushed to the extreme, can produce an asset that is 80% to 95% completed. This technique leads to the concept of modular construction.

What is off-site construction in 2022?

Indeed, the real off-site revolution lies above all in the change of mindset. It becomes technically and technologically oriented towards the "manufacturing" of a building and no longer towards on-site construction. It also makes extensive use of tools from industry such as DfMA or Design for Manufacturing & Assembly. Gone are the days of on-site design! It is therefore a major breakthrough and those who have understood and already apply it can claim significantly better margins. 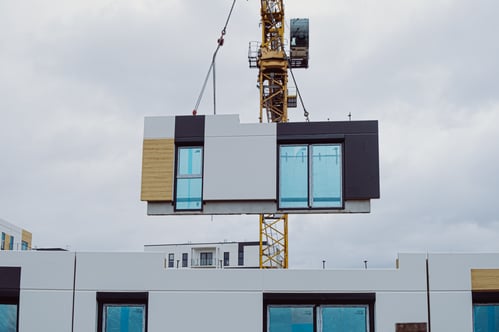 But then what difficulties hinder its development?

It mainly comes down to the profession’s mindset. Difficulties stem from the fact that projects do not take into account off-site construction at the design stage. They are derived from organisational and communication difficulties between the various stakeholders. In addition, another problem is linked to the extensive work that needs to be done in training and raising awareness of the advantages of off-site construction among the various stakeholders, in particular architects. It is essential to make it clear that moving to an industrial approach does not prevent the implementation of very good and high quality projects. At the same time, there is a need to change the regulations and financing arrangements that govern projects.

Modular construction is still perceived as a construction mode that is too far removed from the standards and habits of professionals. Yet it is probably the key to maintaining or even strengthening contractors' margins. Finally, the development of off-site technology is closely linked to digital technology, including DfMA and BIM, as we have been able to discover and highlight. Thus, the use of software such as the Kairnial collaborative platform is crucial to accelerate and successfully implement the era of construction industrialisation.