It is estimated that around 190 m3 of concrete is poured every second in the world, or about 6 billion m3 per year, making it the most used manufactured material on our planet.

The French word for concrete, béton, comes from the Latin bitumen, bitumen, attested in ancient French, around 1165, in the form betun which means mortar. It is an artificial material made of a mixture of pebbles, gravel, sand and water, joined together by means of a water-based binder, which serves as glue, usually cement. Ubiquitous in everyday life, it nevertheless remains a material whose complexity is hidden by its monolithic appearance. But what is its composition, history and future? All these questions are especially important given sustainability and recycling requirements that are currently expected by public and private stakeholders.

Scientific and technical progress: the origins of concrete

The history of cement and concrete is linked to a series of inventions and patents. According to the definition of concrete as a mixture of a binder and aggregates, its use dates back to ancient times (3000 to 700 BC) with clay-based mixtures in Mesopotamia in particular. In the nineteenth century, thanks to the industrialisation of cement manufacturing, many successive advances ensured the success of concrete. Like the invention of "reinforced cement" by a gardener named Joseph Monier (1823-1906) who, between 1867 and 1891, filed patents for an iron- and cement-based system for making planters, pipes and water tanks. Although there are dozens of different types of concrete, the types of concrete most commonly used are reinforced concrete, deactivated concrete, fibrous concrete, pre-stressed concrete, high-performance concrete, sprayed concrete and ready-mixed concrete.

Various uses: from buildings to furniture

Furniture you say? But with what concrete? Waxed concrete is a coating that is usually applied to wooden furniture. Original and contemporary, fibre-reinforced concrete is a raw material that is increasingly used in interior design, especially to make furniture. But let's return for a moment to the most common use of concrete: reinforced concrete constructions. It is present in most modern buildings and installations and contains a small amount of cement (about 10% of the mass). It is important to note that reinforced concrete is responsible for 7-8% of global CO2 emissions, which gives cause for reflection and therefore prompts further research.

Deconstruction and recycling of concrete

The life cycle of concrete does not stop at the manufacture of the material and its primary use. Indeed, concrete continues to exist even if the original structure is no longer used. Deconstruction is now very often part of  concrete’s life cycle. Crushing and reuse of demolished concrete seems to be a basic requirement for achieving carbon neutrality even if the separation of steels remains energy-intensive and negatively impacts the carbon balance. A practical example of reuse is the use of rubble from the crushing of "used" concrete as a concrete underlay for metro lines.

In 2022, about 69% of the waste produced by the deconstruction of structures can be recycled or reused. This waste is known as a building’s construction products and materials (of course, it does not exclusively consist of concrete). If reprocessing is not possible, this waste is simply used as fuel. 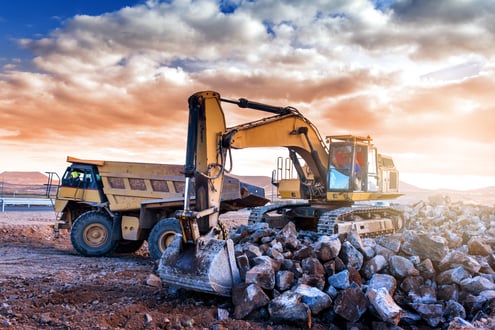 Resolutely aware of the carbon footprint of concrete, industrialists are trying, through innovation, to invent new concrete that will have less of an environmental impact. These innovations include low-carbon concrete, which is a material with properties, performance, qualities of use and durability equivalent to those of conventional concrete but which generates lower greenhouse gas emissions. The "greening" of concrete, even going so far as achieving carbon neutrality, also involves the choice of its components. 20 years in the making, the development of plant-based concrete saw the launch in June 2021 of a research program, scheduled to run more than 2 years, aimed at recycling waste, in particular bagasse and pallets. The group works to make the dimensional limits and mechanical characteristics of hemp, miscanthus, flax or rice husks more reliable.

The use of platforms such as Kairnial makes it possible to identify the concrete used for the construction of the structures and thus to anticipate its recycling in the event of asset deconstruction. While we used to be satisfied with single-use concrete, today's challenges force us to change the construction industry as a whole. Digital technology seems to be one of the keys to facilitating the supply, management and processing of concrete on projects.